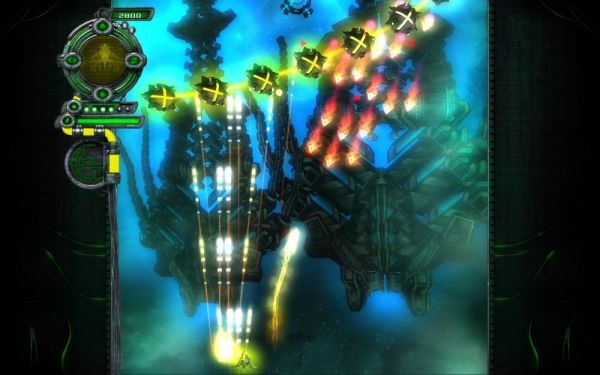 Candella Systems has announced a brand new top down shooter called Eclosion for a multitude of systems including Xbox Live Arcade, PSP, Wii and PC.  The game is a top down shooter with the classic gameplay to follow, and allows two players to team up.

Sure there's spiffy graphics, particle systems, explosions, and probably llamas - but what sets Eclosion apart from other shooters out there is its soundtrack.  The developers actually used some classic synthesizer chips, like those found in a Commodore 64, and create the soundtrack by mixing that with some modern flair.  The game is packed with over 90 minutes of this style of music and we can't wait to hear it.

Along with all that there's 40 levels through 10 environments with different 50 enemies to contend with.  Your ship is upgradable as well with progression tracked through online leaderboards.  All of this is able to be experienced in local co-op play with another friend.

There's no release date or price given for Eclosion, but as soon as we know more, we'll let you know.