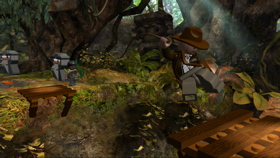 Anyone that's been a fan of the Lego Star Wars titles knows that they are solid games for cooperative play.  And if you've been following stuff in Lego-land you know there's a new Lego game coming out based on the Indiana Jones movies.   It looks like the folks over at Lucas Arts have decided to keep the focus on co-op play, and this time they've upped the ante by including a 4 player co-op mode. There's no details as of yet on whether the co-op modes will be available online, but we'll definitely keep you informed!