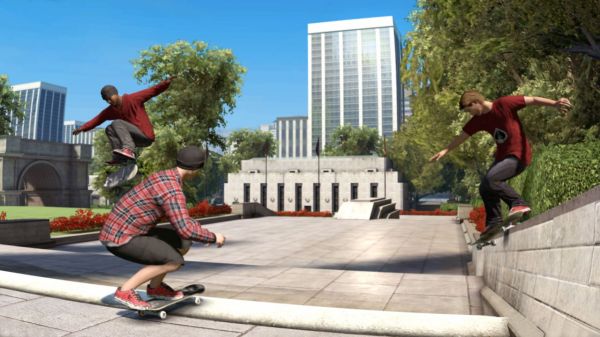 EA just sent over a fresh batch of screenshots for their upcoming game Skate 3.  While a skating game might seem like an odd choice for a co-op game, if you've followed our previous coverage you have a general understanding of what EA is trying to do.

At a recent EA event in NYC I went hands on with the game and talked to one of the producers about it.  The biggest thing I came away with is it's all about community and customization, something we're seeing a lot of games driving towards.  The idea for you to create your own skate team, complete with logos and branding - and then sell that to other gamers.

What exactly are you "selling?"

The overall goal of Skate 3 is to sell 1 million branded skate boards.  This occurs in a few different ways, but it occurs regardless of you playing single player or co-op.  By completing goals and challenges in game you'll start to sell your team's boards, these challenges can be accomplished alone or with friends in co-op, some may even require friends to complete.

The game also has a bit of an open world flavor to it.  For instance, say one of the challenges was to jump over a park bench. While making your run for it you realize you might not quite make the jump - luckily your friend is manning the bench and is able to push it to a more manageable distance while you are in mid flight.  Complete the jump, complete the challenge, both players sell boards. In fact, objects play a big part in customizing the Skate experience.  You, and your team of six skaters, can create your own custom skate parks, brand them with your team and fill them with objects, and then put them online for others to download.  You can even brand objects like banners and flags and make them available for download.  For every download you get, you sell more boards, and get closer to "completing" Skate 3.

All of your Skate ventures can also be recorded in real time using the in game film editor, which - you guessed it - can be shared online.

I'll admit I've never been that big into Skating games, and its something the team is really trying to focus on with Skate 3 - broader appeal.  To be honest, I was having more fun watching my guy get hurt from my failed attempts at jumps than anything else, but, the customization aspect and having friends with me throughout the ride is greatly appealing.

We'll see what happens when Skate 3 hits this May.