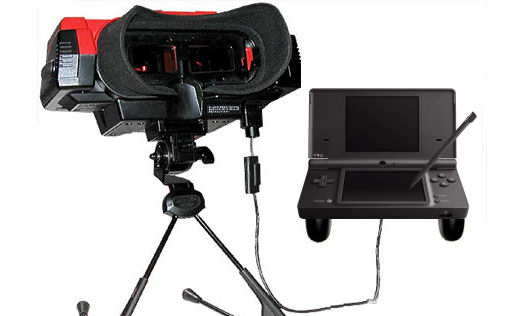 The Virtual Boy jokes will be a plenty until someone actually gets some hands on time with the device, but Nintendo has announced a brand new Nintendo DS coming sometime in Fiscal Year 2011 called the the Nintendo 3DS.   The device will be fully compatible with DS and DSi games but sport a 3D display that will require no glasses to experience.

Rumors so far has the device with a "3d control stick" as well as 4 inch "parallax" screens provided by Sharp which would allow for hybrid 2D and 3D display.  It's also rumored the device will feature rumble, a faster wi-fi connection, and a "movement sensor."  As well, I'm sure the 3DS will launch with a Mario title.

But what exactly is a 3D portable gaming system and how does it affect you, the co-op gamer?

To get an idea of what it might look like, you only need to look at Nintendo's DSi - and a Japanese DSi Ware title called Hidden 3D Image.  The game utilizes the cameras on the device to do head tracking and adjusts the 3D game world to your perspective - the result is impressive.

But as we said, this is vastly different than a parallax based technology which most analysts and developers perceive will be the tech of choice for the 3DS.

One problem with the technology as a home TV option is that the viewer needs to remain still and central for the effect to work. However, as Andre Oliver, CTO of Blitz Games, points out, "if you know there is only one viewer and they are roughly in front of the display and within a meter, then there are ways to give each eye a different image."

Thankfully all this speculation won't last long, as Nintendo has confirmed today the device will be playable at E3 in June.  You can guarantee Co-Optimus will be there to get the hands on impressions.

What do you think of the concept of the 3DS?