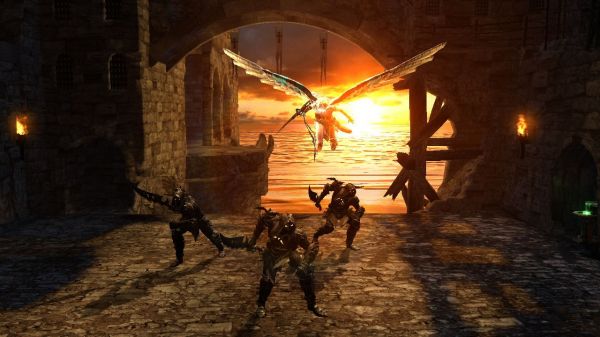 It's been a few weeks since we previewed the upcoming Dante's Inferno DLC.  We're inching closer to it's April 29th release date, but are left to wonder - why wasn't this included with the retail release of the game?

The short answer is including this would have pushed the game's release back, and from a business standpoint, that puts you head to head with God of War 3.  But that wasn't the only reason the content wasn't there, in a recent interview with VG247.com the game's lead designer, Greg Rizzer, talked about the game's co-op DLC.

“One of the things we wanted to do was differentiate ourselves from the market,” said Rizzer. “Taking a game online blows the scope of your product way up. The co-op team didn’t start production until the single-player was well along. Then, we looked at DLC instead for the co-op in because we wanted to minimize the risk of a shipping slip."

So while the co-op itself was difficult, it was all the community features surrounding it that truly pushed it into the DLC territory.

“So since this was a big experience pack with leaderboards, ratings, etc., it immediately increased the scope of the product. So since we didn’t want to hurt the single-player, we waited and added it as DLC”.

And while the Trials of St. Lucia is an online only co-op expansion, the lack of couch co-op was something dissapointing to Mr. Rizzer as well.

“Personally, I miss couch play co-op a lot, but as games get more and more complicated and complex it is becoming where online gaming is taking over that whole genre”.

“You need ample space for Lucia to be how she is,” said Rizzer. “We could not due splitscree for this because if you try to, you have to render characters on the same screen and in order to do that we would have lost 60FPS due to technical cuts."

Perhaps they should have made a deal with the devil to get around technical limitations.