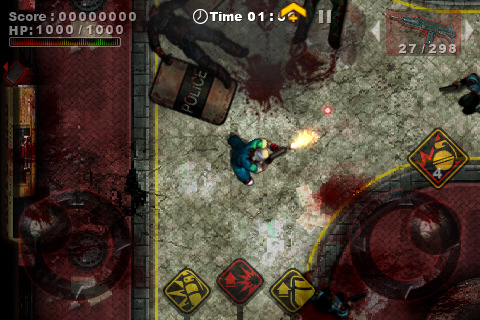 Did you know Co-Optimus now lists iPhone/iPad/iPod games in its database now?  It does.  Despite covering the platform for some time we just didn't feel it was worthwhile to break out the few co-op games it has, but now with several high profile releases, we've decided to track these titles more closely.

One of these titles called Alive 4 Ever Returns, a sequel to a four player co-op title of a similar name.  This top down shooter has players facing off against zombies via local wi-fi or soon to be bluetooth connections.  With a pseudo RPG style progression system and dozens of levels, it looks to be a solid action game to play on the go with some friends.

The whopping 40 new levels inAlive 4-Ever RETURNS are also grislier than their original counterparts. Overall, the mood is darker, there is far more environmental eye-candy, and some of the levels are just downright cool to play through (loved tackling zombies on the football pitch!). Together with the standard mission-based challenges of the first game there is also a self-explanatory Survival Mode and new take on gameplay in the form of Horde mode. In this mode you face wave after wave of increasingly difficult zombies, trying to get through as many waves as possible, with your life and ammo replenished after each wave by spawned items. Each of the new game modes puts you in the role of the character from your challenge mode, meaning they can be revisited each time your character grows to attempt greater feats.

Sounds like an improvement all around for the sequel.  It's odd that most of the game we have listed for co-op on Apple's on the go platform have zombies in it.  I sense a growing trend.

If you know of any other co-op titles for the iPhone, send us a tip and let us know!