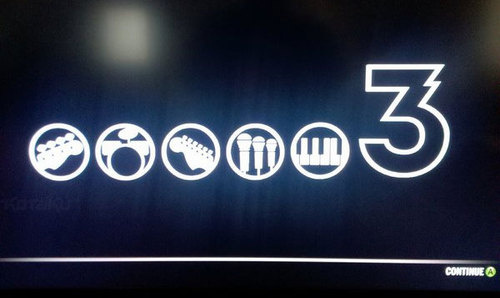 The demo for the latest band-centric music game, Green Day: Rock Band, is now available for download.  XBLA and PSN users can check out "Welcome to Paradise" and "Boulevard of Broken Dreams" to decide whether this title is worth the gaming buck this unusually busy summer season.  But a preview of the upcoming Green Day game isn't the most interesting part of the demo.

A teaser screen, pictured above, is shown when one quits the demo.  The three microphones confirm that Beatles style harmonies will be in Rock Band 3.  On the far right, though is an icon that would seem to indicate a piano/keyboard instrument of some sort.  This has been on many a music game fan's wish list for quite a while, and will certainly bring a much needed shake up to the genre.  Perhaps the designer's claim that RB3 is "the next big leap in music gaming" might not have just been marketing spin.  Are keyboard controllers the next logical step, or just another attempt to sell us another fake plastic instrument?  I suppose only time and Rock Band 3 will tell.