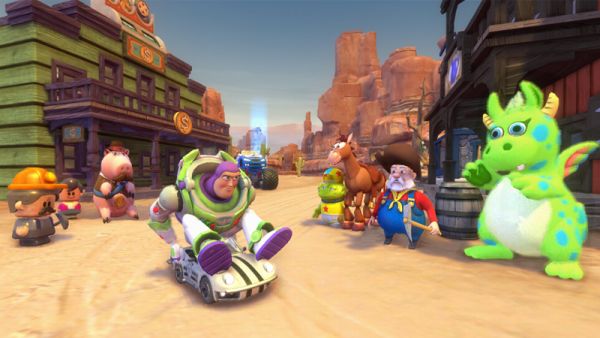 With Toy Story 3 the movie right around the corner, you can bet your favorite cowboy doll there's a game following close on its heels. Avalanche Studios was tasked with bringing the game version to the Xbox 360 and PlayStation 3, and producer John Day took the time to divulge some co-op news on the PlayStation Blog about Toy Story 3.

Several of you asked about multiplayer. Yes there is co-op play in both story and toy box mode. And yes, both players can be Zurg, so no need to fight over him :)

The "Zurg" in question is the lovable Darth Vader homage from Toy Story 2, who is playable as a PlayStation 3 exclusive - and, before you ask: no, he's not a pre-order bonus.

Unfortunately, the co-op is limited to two players and is splitscreen only, something that I'd personally hoped wouldn't be repeated too often after the last few LEGO games left out the online support. John did offer a simple and (mostly) satisfactory explanation, though...

Online co-op is something we wanted to include as well. However, with the schedule of the project, and the sheer number of other features and new tech we developed for the game, we had to let some lower priority features fall off the bus.

In that case, John...I suppose I'll call off the Green Army Men. You live to play another day.