We walked out of the theater, squinting in the brightness of the lobby.  The crowd rushed by, moviegoers headed off in different directions.  The smell of popcorn was strong.  Neon lights glared everywhere, and movie posters lined the wall.  My youngest son tugged on my arm.  "Hey Dad, can we play a game?"  Smiling, I nodded.  The little arcade in the movie theater was busy, full of children celebrating the last few days of summer break.  I walked over to the change machine, and the quarters clanked noisily down the chute in procession.  With a mild whoop, the two ran off to find a game.  Would it be the noisy, psychedelic DDR machine?  Perhaps the Air Hockey table would capture their interest.  I watched, curious as to what they would choose.  After a few moments hesitation at the mesmerizing electronic buffet, my oldest son led his brother to Area 51: Site 4, and they plunked in their quarters.

The boys grabbed the guns off the holsters, and immediately the little guy was aiming his weapon all over the place.  I scolded him when he aimed at a rather bored looking mother whose kids were playing pinball.  Making all sorts of zapping and machine gun noises, he closed one eye and aimed back at me.  "Gotcha, Dad!" he yelled, and grinned at me.  But then the game started, and he totally ignored me.  I'm not sure quite why, but my oldest son chose to play the training missions first.  Maybe he wanted the practice, or perhaps he thought his little brother needed to start easy.  In any event, after a minute or so, they were both blasting away at incoming waves of flying saucers like old pros.  Cool and calculating, my oldest son kept the gun at arm's length, moving it only slightly as he shot the invaders out of the sky.  His little brother was the total opposite, both hands on the gun, shaking it all over, pulling the trigger indiscriminately. 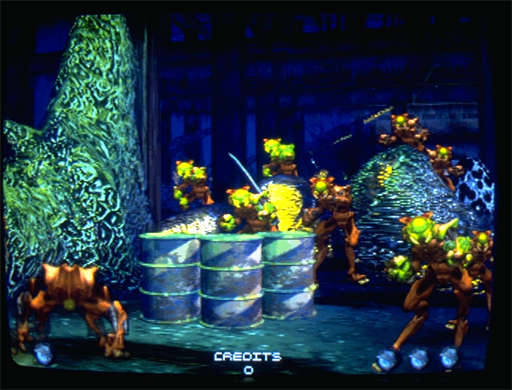 The first level was cleared easily.  They high-fived and got ready for level two, where actual aliens were advancing towards them.  The graphics on this level sure weren't the best, but it didn't effect their enjoyment one bit.  "Oooh I got him, I got him!" yelled my youngest, just like Luke Skywalker shooting down TIE Fighters on the Milennium Falcon.  Too busy shooting to even listen, big brother kept his eyes on the screen, trying to cover all areas.  Green aliens exploded into huge, garish puddles of goo, but too many made it out alive.  Needing to shoot 36, my boys only managed to eleminate 27.  "We can do it, just cover your side of the screen," the sharpshooter instructed his young protege, and they attempted it again. 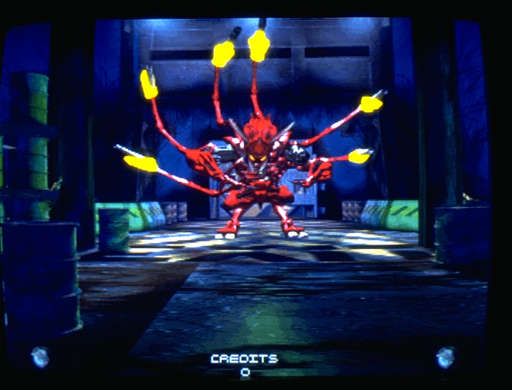 This time, only 34 were needed to pass, yet they came short.  At this point, I almost stepped in to my youngest son's place.  Many strings of enemies came out on his side, and only being seven years old, it was a bit too tough for him to get them all.  However, I held back, knowing that it wasn't fair for Dad to take over; it was HIS game, after all.  On their final attempt, I thought they had it for sure.  And they were so close: 31 of the 32 needed to pass the level.  As the continue button winded down, they dug frantically in their pockets for more coins.  Plunking them in at the last second, they began again.  Even after another credit's worth of time, though, the goal was still not met.  "Aww, so close" said the oldest.  The little one just exhaled deeply and ran off to the Air Hockey. 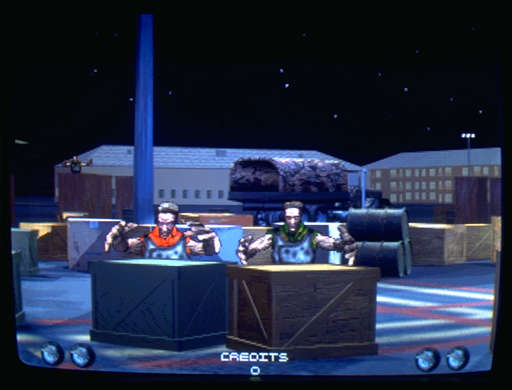 After the boys played a match of that (the eldest won, 6 to 5, letting his brother score on him on purpose), the quarters were all gone.  We walked out the door, and the heat from the pavement washed over us.  I asked them what they thought of Area 51: Site 4.  "Good" muttered the youngest; that's pretty much his response to anything when he'd rather be playing with his Power Ranger than talking.  My oldest kid told me he thought we should try to get it for home.  "That was a lot of fun, Dad."  I agreed.  However, I'm sure playing the game wasn't half as enjoyable for them as it was for their old school gamer father to watch his two sons enjoy some co-op.