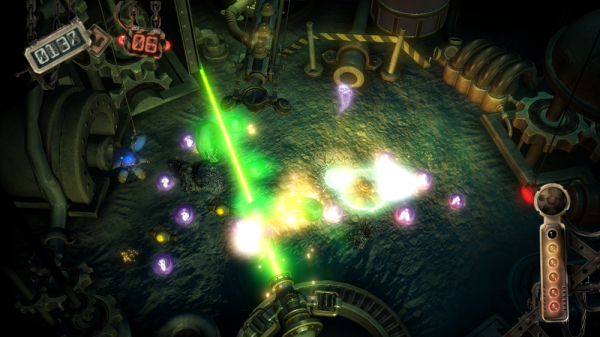 As the avalanche of pre-E3 news keeps rolling, we bring you news of an interesting upcoming Xbox Live Indie Game.  Named Zero Point, it's brought to you by a couple former Bioshock developers, Tyr Edge and Fennec Black, who have formed a company named LunaVu.  Zero Point is described as an action/strategy hybrid, and looks very impressive.  You play the role of a technician, defending your research equipment from blob-like alien Creeps.  Your Plasma Cannon destroys foes, and the mobile Lunar Shepherd tool herds Creeps around as they avoid it's headlights.

Where does the co-op come in?  In two-player mode, one player controls the Cannon, and the other, the Shepherd, temaing up to take down the Creep army.  In a particularly innovative touch, two people can co-op using the same controller, which sounds like a lot of fun.  Check out the teaser trailer and gameplay tutorial here, and then peruse our gallery of screenshots.