The game up for discussion today is the very definition of a co-op classic.  Two players can play together, working toward a common goal.  In this case, that goal is whacking bad guys on your way to putting the smack down on the big boss, Death Adder.  The game is an absolute classic, as well; it spawned several sequels, and its influence can be seen even in upcoming games like Sacred 2 and Diablo 3.  In honor of the Olympics, then, I bestow a gold medal on the undisputed Co-Op Classic: Golden Axe.

I have to be honest, it was watching the video for Sacred 2 that got me thinking about Golden Axe.  The similarities between the two games are astounding.  Fantasy setting?  Check.  Magic spells and swordplay?  Uh huh.  Mounts to ride around on?  You got it.  Even the gratuitous cheesecake shots from Sacred 2 were reminiscent of Golden Axe's chain-mail bikini-clad Tyris Flare.  I guess everything old is new again! 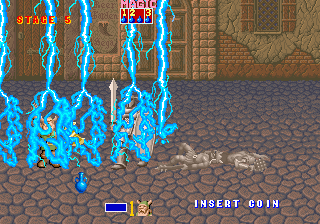 It could be argued that the formula for Golden Axe is archetypal.  Players choose from three separate characters, each of whom has different strengths and weaknesses.  The dwarf wielded a wicked battle-axe, and could cast lightning, albeit weak. Tyris , the female fury, had the best magic, and could store up to six bars at once, before unleashing her fiery spell.  The male warrior, Ax Battler (how imaginative!) was in between the two, equally effective with earth magic and his sword.  Yes, you got that right, a dude named Ax Battler wielded a sword. 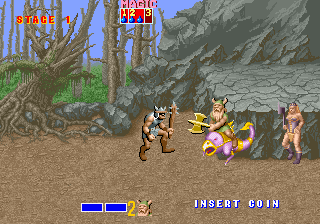 The most memorable feature of the game, to me, was being able to use mounts.  It is cliche now, really, but at the time, it was new, cool, and exciting.  The first few levels, the only available mount was an odd bird creature with a lizard like tail, which could sweep all over, knocking down foes.  However, if you made it far enough, other mounts, almost draconic in appearance, were available.  These uber critters breathed fire and were the Cadillac of the game's mounts, for sure.  It was such a good feeling to beat a baddie off a dragon, hop on it, and then use fire breath to fry the same guy. 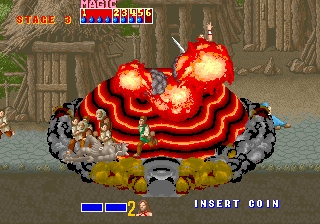 I'm not sure how well Golden Axe would hold up today.  I took a look at some screenshots, and thought to myself, "Wow, I don't remember it looking that bad."  If you can look past the primitive graphics, though, there is a core experience to the game that even modern gamers can appreciate.  Golden Axe was released forXbox Live Arcade last year, for the low price of $5.  I'm tempted to download it just to play through it with my kids for old time's sake.  I just hope I'm fast enough to kick the magic potions out of those irritating little men when they run by!