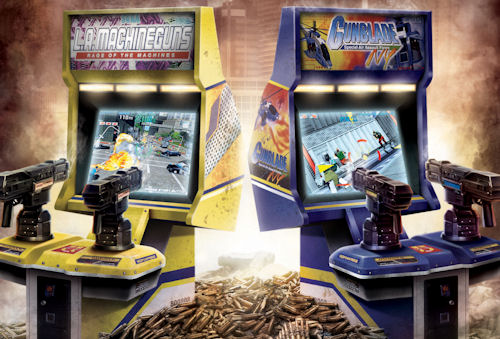 Two classic Sega arcade titles have hit the Nintendo Wii in Gunblade NY: Special Air Assault Force and L.A Machineguns: Rage of the Machines - Arcade Hits Pack.   Ok, so the name might be a mouthful - but fans of light gun shooters will fondly remember the machine gun action of these games in the arcade.  What set them apart from other lightgun shooters at the time was instead of a loose pistol attached by a cord, players leaned up against the machine to a mounted machine gun with force feedback.

Like the name suggests you'll actually be getting to games in the pack of the mid 90's shooters with full two player co-op support.  Your price?  120 quarters.  We've posted some screenshots below.