Earlier this week, you, the Co-Optimus readers, voted among three games to be the topic of this weeks Classic Co-Op.  The result was a tie!  So, I was forced to make a decision myself, and I voted for Teenage Mutant Ninja Turtles IV: Turtles in Time.  Next week, we'll take a look at Altered Beast, I promise.  However, the cheesy voice samples and awesome weredragon action will have to wait.  For now, our focus is on an iconic co-op title, and one of, if the THE best TMNT game of all time. 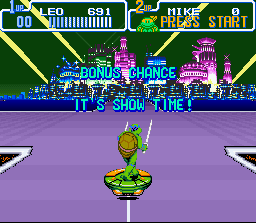 It's hard to believe that the Teenage Mutant Ninja Turtles (hereafter abbreviated as TMNT) are more than 20 years old!  The Turtles were immensely popular in the late 80s and early 90s.  However, unlike most fads, TMNT are a part of pop culture has been around forever, like Star Wars, or Power Rangers.  I remember my younger brother really loved the original cartoon, and I watched it too, though I was a bit old to really get caught up in it.  When the live action movies hit, though, I was all over it, this being just about the time I started driving.  Even today, my kids love watching the TMNT movies, old and new, and still get some of the toys from time to time. One of the few NES games we owned, not rented, way back when, was the first TMNT.  I remember two things about it:  first of all, why were the turtles were all wearing red masks on the cover?  (It was recycled comic art, that's why.)  Second, why was that game so freaking hard?  I must have spent months trying to beat the game and never succeeded.  In fact, when I downloaded the original TMNT title for the Wii's Virtual Console, I felt the same way.  My kids played it for about an hour, and never looked back. 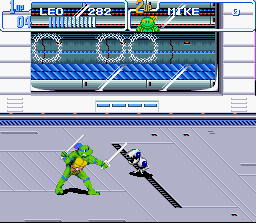 However, despite my distaste for the NES Turtles game, I felt the exact opposite about Turtles in Time.  I first played the game in an arcade, and spent way too many quarters beating it over and over with friends.  It totally made sense for all four turtles to be able to go out there and kick some shell, together!  The size of the arcade cabinet, the colorful art, and the great voices all really got your attention when you saw it in an arcade, at the movies, or wherever.  The gameplay was quite enjoyable, too.  All the crazy locations and enemies, from the sewers to dinosaurs to a pirate ship and the far future, are still vivid in my mind to this day.  The best thing about Turtles in Time, though, was that sometimes, when beating on a poor foot clan member, your trusty turtle would grab them and throw them right at you, the player, with a cool 3D effect.  That was quite impressive in 1991 and still is today. The Super NES port of the arcade game was one of the finest ever.  I had never seen a game look quite as close to its arcade counterpart.  Apart from the fact that the home version only allowed for two players, I'd say it was as good as if not better than the arcade game in every area.  There were several new levels and enemies unique to the SNES, like the Technodrome level, and the Mouse robots, shown above.  But the coolest new feature of all was the first boss fight against Shredder, which is one of the first instances of a "puzzle boss" ever. 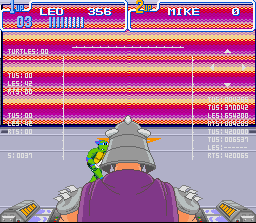 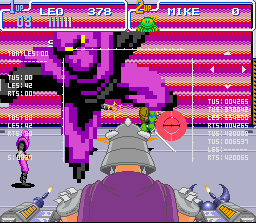 As you can see in the screenshots, Shredder is in some kind of crazy machine, off screen, and you have no way of hurting him with your weapons.  This was quite a conundrum on my first playthrough with the home version.  Only by sheer chance did we discover the method to beat him: you had to throw defeated enemies at him, like you were throwing them off the screen in 3D, as mentioned above.  The sense of discovery here was awesome!  If you toss enough Foot clan at him, Shredder leaped through a portal, and the Turtles were off after him.  The design for this stage was quite clever, and went to show you that the game was much more than just an easy arcade port.  The final confrontation with Shredder was changed as well.  He wore armor similar to that of the second TMNT movie, and had developed the power, oddly enough, to "de-mutant-ize" the turtles, costing you a life and changing your poor hero into a normal, non-ninja specimen. 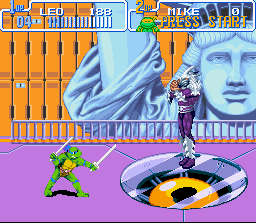 I could go on and on, but I feel a bit like I am gushing here.  Suffice it to say that TMNT IV: Turtles in Time was one of the most memorable games I've ever experienced.  Playing the game really felt like you were in an episode of the cartoon series.  The game showed off the graphic horsepower of the SNES (more like pony power today, but you know what I mean).  It was an absolute blast to play through with a buddy.  In every sense of the term, TMNT IV: Turtles in Time is a co-op classic.  Next week, we'll look at one of this game's contemporaries, available only for the SNES' archnemesis, the Sega Genesis: Altered Beast!

Thanks to X-Cult for the images!