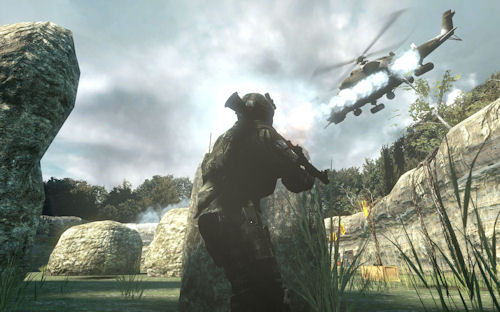 Alliance of Valiant Arms added their new co-op mode and features in the latest update on September 9th.   If you need to know the goods on it, we had a preview of it here.  In addition to that coverage we have a brand new trailer showcasing the mode, which you can see below.

I got a chance to play a bunch of the new map which features 4 player co-op.  The first thing I can tell you - it's really hard.  Co-Op is an absolute must.

You'll start out in a cave and immediately work your way to a river boat ride.  All along the way guys are spawning out of thin air with one thing on their mind - the utter destruction of your team.  Along with some cannon fodder type enemies there's some big brutish guys that take more than one shot to bring down.  It's incredibly easy to get overwhelmed.

As we navigated down the river additional damage dealing objects headed our way  - usually in the form of exploding barrels and rockets.

It took numerous tries to get past this part, and once we did, we were greeted with an even bigger brutish guy that was a boss.

After a dozen or so attempts with various teams, I only managed to get past that "boss" once, only to be killed by helicopters shortly after.

Death Valley is a good name for the update - as you'll be seeing the respawn screen quite a bit.