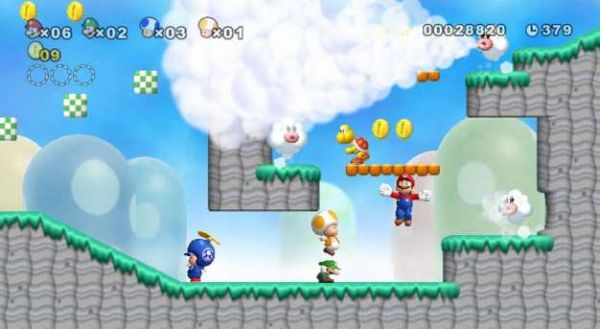 Today marks the 25th anniversary of one of the greatest video games ever: Super Mario Bros.  Released in Japan on September 13, 1985, the title would go on to become an undisputed classic, popularizing the platformer as a genre, and making Mario into a brand-defining superstar.  Though Super Mario Bros. lacked co-op, it's predecessor, plain old Mario Bros., did have a primitive form of co-op, and is one of the earliest co-op games in our database.

Through the years, a whole host of sequels to Super Mario Bros. have been released.  Here are a few highlights among those that we consider to include cooperative gameplay.

Mario Kart Double Dash!! - in this Gamecube gem, a second player rode along with the driver, using weapons and items while racing.

New Super Mario Bros. Wii - I may have been a bit harsh in my review; the game is hectic fun and worth a play, regardless of your feelings on the strength of the cooperative elements.

Super Mario Galaxy - a spectacular adventure, marred only by the tacked on co-op mode.  Still, a worthy title for kicking off our regular Co-Op Casual Fridays column.

Super Mario Galaxy 2 - Easily better than its predecessor, and likely the best game available on the Wii so far.  Still not the best co-op experience, however.

What are your favorite co-op Mario games?