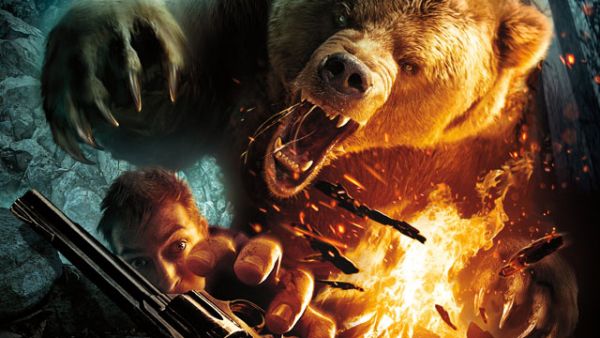 Generally when people go hunting they take along a buddy, right? Even in the arcades there are usually two rifles set up to shoot deer, bunnies, whatever else Cabela's hunters mark as prey. Now we're getting a taste of that action at home with Cabela's Dangerous Hunts 2011, bringing plastic rifles into your livingroom and a giant truck into your neighborhood.

What? A truck? That's right. Cabela's Dangerous Hunts is campaigning across the country in a large semi-truck to raise awareness for bears that might want to eat you when you drop your pistol. Okay, not really. They do have a cool set-up though - complete with plastic rifles that adjust length for smaller gamers, and really interesting decor.

Ben Kuchera over at arstechnica.com went for a test run in this truck, and gives some interesting impressions on the game - which will include co-op dangerous hunting. He even recommends you try it for yourself.

The inside of the truck was everything I could have imagined, complete with the plastic guns hung on the walls in wooden gun racks. The systems and cabling were hidden behind plastic boulders, and there were snakes and a plastic gator to set the mood. If this thing comes to your area, you owe it to yourself to go and take a look—and not just for the free T-shirt. It made me want to make my own jerkey out of something I had just shot. So, if you see this truck, go have a blast. Seriously, they have a plastic alligator. Oh, and while you're at it, this is what the game was like.

We played the PlayStation 3 version of the game, with the analog stick on the back of the handle of the gun allowing you to move the character around the environments. You turn by aiming at the sides of the screen; if you've ever played a Wii first-person shooter you'll be familiar with the controls. The game's plot revolves around an old hunting story from your father, land that has been hunted on by seven generations of men in your family, and learning the rules of the wild.

Movement happens at a very deliberate pace, and you really do get to enjoy the graphics of the outside world. From stalking animals to turning on your scope and taking your shot, there is a high level of tension involved in the game. You're not throwing bullets around—you're moving and shooting with purpose, and the narrative gives you a reason to keep playing. I also played a section that took place in the dark, where I had to shoot a wolf in the heart as it was jumping towards me. "That's actually a pretty scary segment," I was told, and I agreed; my heart was pumping.

And finally, for those with blood pressure issues, want a bit of a competitive edge, or just want some practice - there is a shooting gallery to hone those skills just right.

We also played a shooting gallery section where you basically kill everything you see, complete with competitive multiplayer. Some animals have power-ups over their heads, and killing them gives you powers that you could activate for additional points, such as a slow-motion effect and a 2X multiplier. This is a much more arcade-style experience, but still fun. You are given the additional challenge of having to switch quickly between your rifle and shotgun to kill animals on the ground or birds in the sky, or you'll lose points for "unethical hunting."

Cabela's Dangerous Hunts 2011 will be an Xbox 360, PS3, and Wii game across the board with local split-screen co-op. Expect to see an $80 price tag with the included peripheral (orange rifle with IR sensor) sometime early next year - which will hopefully work with some other shooting-type games.

Cabela's Dangerous Hunts will be around October 29th! You don't have to wait until 2011 to enjoy the amazing co-op shooter, unlike originally thought.