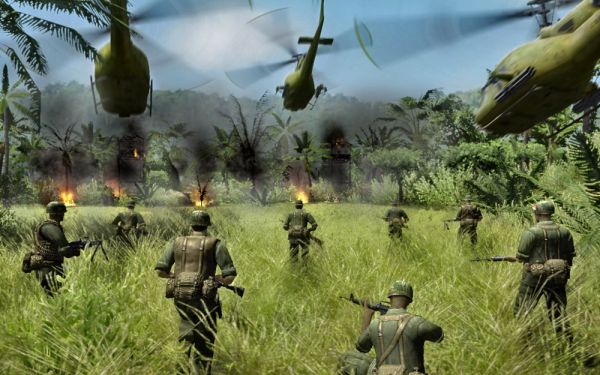 1C Company have announced a brand new game in the Men of War series called Men of War: Vietnam.  The game is a real time strategy, 3rd person shooter hybrid, the puts players in control of two campaigns set during the Vietnam War.

The missions are said to range from "small operations" to "full scale battles."  Here's some background on the story:

The US campaign focuses on a team of elite special ops soldiers, and each one of them has a personality. The unit includes Sergeant John Merrill, machinegunner Jim Walsh, sniper Sonny Armstrong, grenade launcher operator Carl Dillan and combat engineer Bill Kirby. In some missions they can count only on themselves, while in the others they act together with regular US and South-Vietnamese troops.


The North Vietnam campaign tells the story of two Soviet military consultants and two soldiers of the North Vietnam Army who are the only survivors of an ambush prepared by the US troops. The task of getting back to the North Vietnam territory is a difficult one â they have no means of radio communication, no wheeled vehicles, and itâs too far to make it there on foot. On their way these survivors get involved in a chain of bloodbath engagements and find themselves in the dead center of the well-known Tet offensive.

We've got some screens and a trailer to whet your appetite - if you've never heard of this series before you'll take notice after watching the trailer.  Men of War: Vietnam is out next spring on the PC.  Its prequel, Men of War: Assault Squad, should be out soon with a four player co-op skirmish mode.