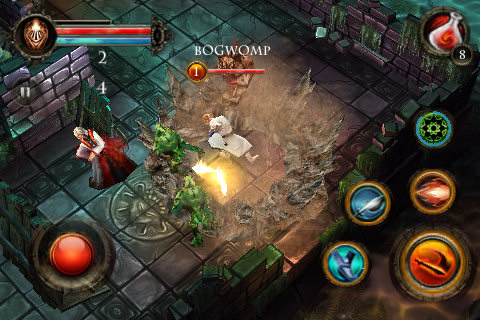 This week was a big week for owners of iPhones and iPod Touches.  Not only did the truly excellent and jaw dropping Infinity Blade hit the device, but a sequel to an incredibly popular RPG was released - and it added online co-op play.

Dungeon Hunter 2 is that sequel, putting the player in the shoes of a warrior, rogue or mage as they trek into the dungeons in search of precious loot.  While the first game was good fun, it was missing a feature everyone was clamoring for, namely cooperative play.  Thankfully Gameloft have answered, providing not only AD-HOC support, but true online play via the internet for up to four players.

You'll need to use iOS's Game Center or Gameloft's own Gameloft Live to connect, but after that you'll be on your merry way adventuring with friends.  Touch Arcade managed to write up some impressions with the title, and sadly what seems like the greatest feature, right now isn't quite working.

Barring the online issue though, I'm liking Dungeon Hunter 2 a lot so far. Although it doesn't do anything radically different than the first, it still offers up the same enjoyable elements with a few nice improvements. If you liked the first Dungeon Hunter, and were craving more once you completed it, then you should thoroughly enjoy this sequel. It somewhat ties into the thin storyline from the first, and assuming the online becomes functional it should provide a decent amount of replay value when you're finished with it.

Online play on these mobile devices is in its infancy, but we're slowly seeing breakthroughs.  Titles like Flight Control are supporting voice chat natively which is a huge step in the right direction for cooperative gaming.

Dungeon Hunter is also coming to PSN, complete with co-op play, though its unclear if its based on Dungeon Hunter 2 or the first game.

Have you played Dungeon Hunter 2?  Have you gotten the online co-op working?