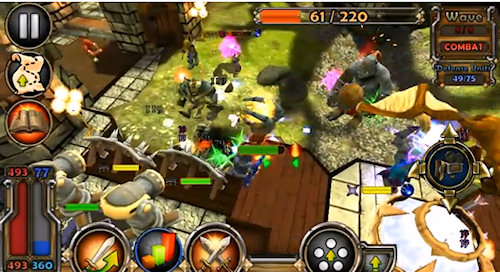 Exiting news for Tower Defense fans, Dungeon Defenders: First Wave, the tower defense/RPG hybrid from Trendy Entertainment is hitting iOS tomorrow on both iPhones and iPod Touches.  The game is a precursor to the full fledged title that will be hitting Xbox Live, PSN, and PC next year.

In Dungeon Defenders: First Wave players can create a persistent character as either a Apprentice, Squire, Monk or Huntress and team up with up to three other friends through the game's campaign mode.  Your character will go with you wherever you play - and any stats or loot earned in a friends game - will come back with you to your own.  Here's where it gets interesting, the character you create on your iPhone will be able to be transferred into the PC version of the game when it launches.

With a price of only $2.99 and promise of online and LAN play, Dungeon Defenders: First Wave sounds pretty incredible.  We've been watching its big brother since earlier this year when it began its life as an Unreal Engine 3 mod.  The graphics for both versions of the game will be nearly identical.

Check out a trailer below to whet your appetite for loot collecting, and be sure to charge your iPod - i have a feeling you'll draining the battery come tomorrow.