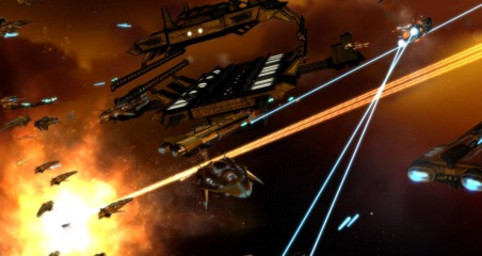 Space strategy simulation co-op sounds pretty intense, and it is. So intense that Sins of a Solar Empire has required a bit of patching to optimize. Co-optimus recently received a huge list from Stardock of patches for Sins, including interface changes, gameplay, game engine, AI and others.

· The game engine has been updated in order to free up more texture memory.
Players should generally use no more than 1.3 GB of RAM on Huge maps with all races represented now. We're very interested to see what everyone's experiences are with this, so please post back and let us know. You can find the total by alt-tabbing out of the game and hitting Ctrl+Shift+Escape, select the Processes tab and look for Sins of a Solar Empire Diplomacy.exe.

· Pirates
o The Pirates system has been completely overhauled with this update. Rather than relying on random upgrades which could result in a huge power curve, the Pirates will now scale gradually in abilities, fleet size and power as a game progresses.
o The size of the Pirate fleet is now based off of the current raid level (Low, Guarded, Elevated, High, Highest) and there are now preset fleet compositions for each.
o Pirates now take into consideration the total amount of bounty on offer before sending out their fleets (at High and Highest raid levels). If there isn't enough booty on the table, the Pirates will send out a smaller fleet. This is to prevent 250 credit cheese scenarios that could spawn a massive Pirate incursion.
o Pirates have the opportunity to purchase upgrades after every launched raid. There are 20 levels of upgrades available to them which include bonuses to Armor, HP, Weapon Strength, Weapon Range; plus special abilities including Intercept, Quick Jump Calculation, Timed Explosives, Heavy Fallout, Embargo Planet and Sabotage Reactor. Basically if you let the Pirates live in a really long game, they will become very nasty indeed! o The Pirate mission system via diplomacy has been updated. Players must now pay a pre-set credit amount to generate a raid (same fleet composition as for bounty-spawned raids). This eliminates the guesswork of paying too much/little and not quite knowing what you'll get (and makes issuing raids generally quicker).
o The Pirate base's population upgrade will now properly increase population growth rate.

· Vasari Balance
o Jarrasul:
§ Colonize: Now grants additional constructor frigates instead of a structure build rate bonus. Gives 1/2/3 constructor frigates for 360/480/600 seconds.
o Skirantra:
§ Scramble Bombers: Reduced expiry time from 120 to 75; reduced cooldown time from 35 to 30. o Antorak:
§ Distort Gravity: Reduced cooldown from 45 to 40. o Vulkoras:
§ Phase Missile Swarm: Increased range from 5000 to 6500; increased max targets from 3/5/7 to 4/8/12.
§ Assault Specialization: Increased bonus damage from 60/120/180 to 90/180/270.
o Stilakus Subverter:
§ Shield Disruption: Reduced Phase Missile Block reduction from 25% to 20%; reduced Shield Mitigation Reduction from 10% to 8%.
§ Distortion Field: Reduced radius from 2000 to 1600.
o Kostura Cannon:
§ Will no longer damage and stun enemy ships.
o Orkulus:
§ Debris Vortex will now only activate when debris is in range of the effect.
§ Debris Vortex's second level will now unlock correctly.
o Raider Xenophobia: Tech moved to level 5; reduced from 2 upgrade levels to 1; will now reduce the Pirate fleet size sent against the player by 1 level (i.e., an Elevated level fleet size becomes a Guarded level fleet). · Diplomacy System o The Aggressiveness Rating for all players has been changed to be a random value between -1.5 to +2 (from -2 to +2).
o The calculation for Military Presence has been updated to look at the ratio of the players' used fleet points instead of just overall fleet points. This should make the overall diplomatic rating more balanced overall, especially at higher difficulty levels. We'll be looking for feedback on this.
o Added a new Trade Bonus modifier for diplomatic relations. Players who have a Trade Alliance will slowly gain a positive diplomatic relations bonus with one another as trade ships reach foreign ports up to a maximum of +2. If the Trade Alliance is ended, this bonus will decrease gradually back to 0.

· The AI will no longer max out all of its gravity wells with mines. Mine building is now based on AI type. This should help reduce memory use and improve performance.
· Fixed bug where the AI would form a Pact, break it, and then immediately reform it if the players' relationship value dropped to a certain level repeatedly.
· The AI will no longer send Envoys to non-aligned gravity wells where the player controls a resource (i.e., if you controlled a neutral extractor at an asteroid belt).
· AI players will no longer "spam" the player with mission requests after a mission has been rejected. Each rejection will cause the AI to wait four minutes before offering another mission (culmulative up to 10 times for each consecutive rejection).

· Fixed a couple errors in the entity files that would cause the game to crash.
· Ability PhaseOutHull will now play the proper sound effect.
· Adjusted max dot for graphics to 0.95 from 1. This should largely eliminate the strange white lines that would appear for some players on the edges of ships/structures. Special thanks to Aractain and Kitkun for this info!
· Missions can now be rejected so long as there's at least half the original mission time remaining.

So there you have it. The list is massive, and may be an excuse to dust off your copy of Sins of a Solar Empire to install the patch - if for no other reason than to have the patch installed and ready to go the next time we host a co-op night.