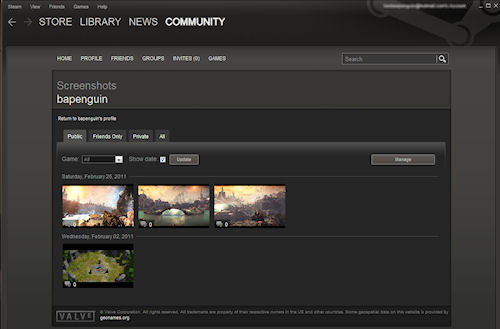 A new version of Valve's Steam software launched this weekend and with it is host of new features.  First and foremost is a long overdue update to the service's voice chat system, improving quality and reliability across the board for games utilizing it as well as in the client itself.  These improvements should help co-op gamers have more reliable conversations while utilizing the client itself and for games like Left 4 Dead.

Another major feature is the ability for users to take screenshots in game for any game that supports DirectX 9 and up.  Simply press the F12 key and Steam will take a screen for you.  When quitting a game you are prompted to name, delete, and/or upload the screens you took during that session to your Steam Cloud.  Users are alotted 1GB of storage.  Once uploaded your friends can easily see what you've done and leave comments on your co-op shennanigans.

To receive the update simply start Steam, if not prompted, go to file->Check Steam for Updates. And while you are in Steam, don't forget to join the Co-Optimus Group