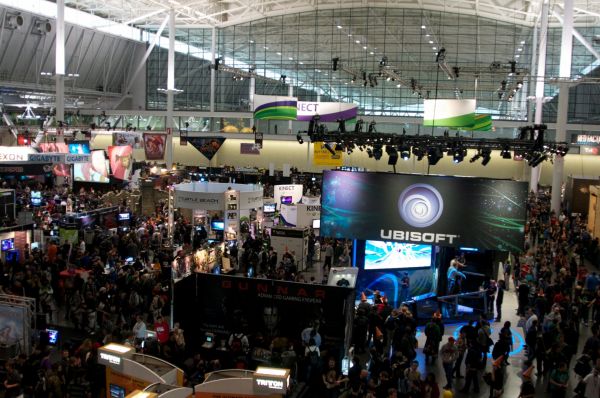 This year's PAX East 2011 show floor was jam packed full of gamers and gaming goodness.  The show saw a record breaking 69,500 atendees - the biggest PAX convention on any coast to date.  Despite that many people the new convention center was wide open with plenty of space.  With that many people and that many things to see we don't always get a lot of in depth time with soemthing.  Still, there were plenty of things we saw that we want to share with you.

Here's some of our highlights.

- Portal 2 looks to ramp up the comedy ten fold, adding in numerous voice talent for multiple characters including the recently announced Cave Johnson voiced by JK Simmons.  Here's what we saw - warning - it may be kind of spoiler-ish.

- Red Faction Armageddon has added a high score arcade mode called Ruin. Your goal is to cause as much destruction as possible in 1 minute. Its hella fun and surprisingly very replayable.

- Gamebook Adventures is an amazing cross between dice-rolling RPG and choose your own adventure books. Each story gives you a variety of options and as you make decisions there are consequences. You can equip your character with items you buy, and you roll digital dice on you iPod/iPad/iPhone to determine the outcome of battles. The story can end or make a turn for the worst, so make sure you use your bookmarks to retrace your steps.

- The First Templar looks to add a unique version of split screen co-op - instead of wasting screen real estate with blackness, the UI has been moved to this area making the playing area much less cramped. - While Orcs Must Die From Robot Entertainment doesn’t have any co-op yet, the action tower defense game seems like a “perfect fit” for the mode according to one developer we talked to at PAX East. While the initial game won’t have co-op, we may see some DLC or something else in the future.

- The PC version of Fable 3 was on display in 3D and we were mightily impressed. The environments looked like dioramas and the characters looked like action figures. Very cool.