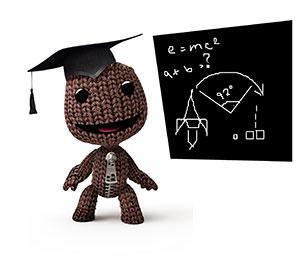 Mr Sackboy was the best teacher ever

Computers have been a part of teaching in Britain for decades.  I remember using BBC Micros, an ancient British computer, to create flashing images that would set off any epileptic student in the class.  Things have moved on since the 90s and although programming in BASIC was useful, it was nothing like Media Molecules new plan.  How do you make learning more fun?  Wrap it up in a LittleBigPlanet 2 costume!

Sony has revealed the Teacher's Pack for LittleBigPlanet 2 for use in British schools; to be released in May.  They are hoping that this DLC will bring the Playstation 3 into the classroom - I for one cannot see any issues with unruly children playing Killzone 3 when the teacher's back is turned.

The pack contains levels designed to work with the British National Curriculum and will harness the mighty power of Move.  As the games industry becomes an increasingly viable career choice, it is hoped that the Teacher Pack will start pupils off in the right direction by using the basic creation tools in the game.  There will also be specific  levels that utilize physics and mathematics (math to our American cousins).  How will this work?  Students could be asked how far they think they can throw their co-op buddy across the level when using an ingenious contraption.

With a planned release of May it won't be long until Teachers can get their hands on this prospective new tool, but will it actually work?  Some may argue that this is nothing more than a cynical ploy by Sony to shift more units (if they are currently not being held by EU customs).  I for one encourage the use of computer games as a form of education.  Without the likes of Mario I would not be the balanced adult I am today; or have the ability to stamp on a turtle.

Is there a place for computer games in Education?

Would you like to see LittleBigPlanet 2 being used in North American schools?