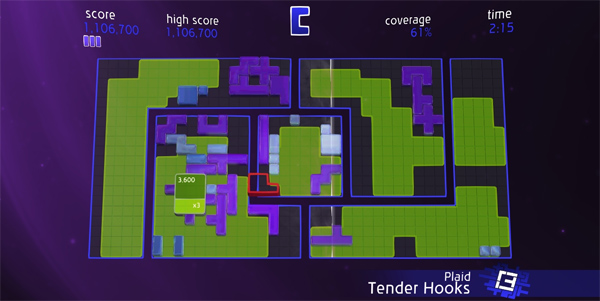 It has recently come to our attention that the serene music puzzle game Chime (previously an Xbox LIVE Arcade title) will be making its way over to the Playstation Network, complete with four-player co-op in this Super Deluxe edition. Not only that, but it makes the trek today (March 29th). Chime Super Deluxe edition will be available on XBLA and PC sometime in the near future.

[T]he biggest change in this version of the audio/visual-focused puzzler is the inclusion of offline four-player modes. Depending on the type of trip you're looking to have with friends, you can roll smoothly with some cooperative gameplay or freak out in some versus. Let all those pretty colors and sounds wash over you, taste the purple and feel the bass.

Here we have an interview with chiptunes artist "Sabrepulse" on his work re-creating the music of recognizable artists using the chiptunes style for an authentic gaming feel.

Unlike the original release which was done by artists for charity, Chime Super Deluxe is a commercial entity out to make some money for the developers and people involved in order to spread Chime beyond XBLA. A Facebook thread talks briefly about the decision to go commercial - primarily to support the community, but also bring the power of Chime Super Deluxe to other platforms.

We always wanted to make a version for PSN and this version is our first commercial version (not for charity) of the game. The XBLA version did really well for the charities and we do want to support that community as soon as we can.

You can expect Chime Super Deluxe to go live on PSN sometime today at the retail value of $9.99 in North America.