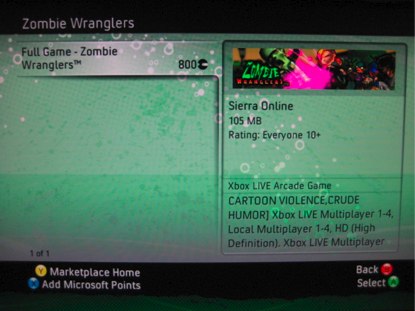 Thanks to some astute readers over at Xbox360 Fanboy it's been found that the 4 player co-op title Zombie Wranglers is available to download...even though it shouldn't be.  This would be the second time the game has been involved with a Xbox Live Arcade mix up, the first having it already listed as released.

To download the game you'll need to see a special "Shocktober" promotional banner ad on your dashboard, by following that link you'll be given the option to download the full game.  No word on whether or not Microsoft will correct this problem, but if you've been waiting for this game I suggest you hurry up and snag it!

Update:  It appears even though it's still listed, you can't actually download it anymore.