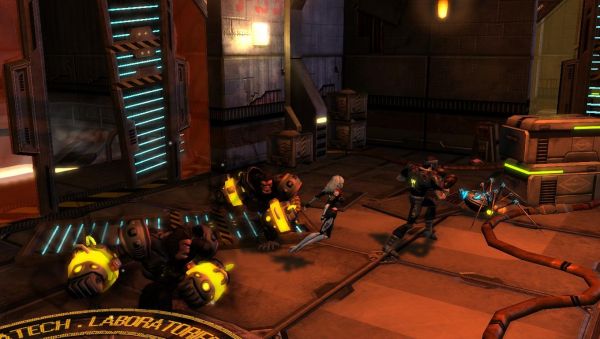 Space monkeys, robot spiders - what more could you ask for?

With the Playstation Store rumored to be rising from its unwanted hibernation today, access will be available once more for developers to release their games on the platform.  Zoo Interactive are the latest developers to consider forgiving Sony and/or The Hackers for PSN's early summer hiatus with details of Wanted Corps, a twin stick shooter coming to both PSN and PC in the coming weeks.

PSN and PC are not short of twin stick shooters, but Zoo Interactive is hoping that Wanted Corps will stand out from the crowd.  The game is 2 player co-op throughout the campaign, both locally and online.  You play as a duo of space bound bounty hunters who are sent out to capture escaped felons who fled from the scene of a downed prison craft.  Like the recently announced PSN exclusive Under Siege, Wanted Corps will be playable with either the traditional control pad or Move controller.

If yet another third-person-twin-stick shooter sounds just up your alley, and you wish to recreate Boba Fett's greatest captures, then check out the gallery and trailer after Read More.