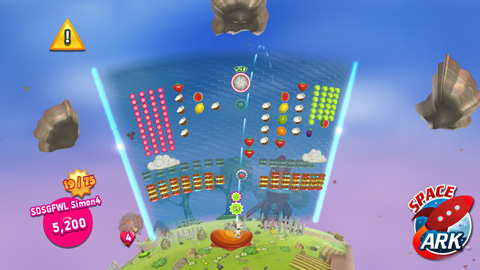 The puzzle-action of Space Ark, an Xbox LIVE Arcade title featuring two player co-op will be making the transition to the PC this month. The goal of the game is to repopulate the galaxy with various animals (hence the "ark" name), keeping them in the air with an Arkanoid-esque paddle. The animals bouncing in the air then pick up DNA orbs to rebuild species and complete each level.

The PC version of Space Ark includes all of the original's Mission, Time Attack and Multiplayer modes, plus a host of controller options and full Steam integration including online leaderboards and Achievements.

Unique to Space Ark is - well, almost everything. Not only are you launching animals into the air instead of lasers or a ball, but the animals launch at an arc. Collecting orbs in a particular order is also important. Color coded groups must be collected in order to move on. The visuals and unique two-player co-op rounds off this title as it moves to the PC. We're glad to see some diversity in the arcade puzzle games that seem to live primarily on XBLA.