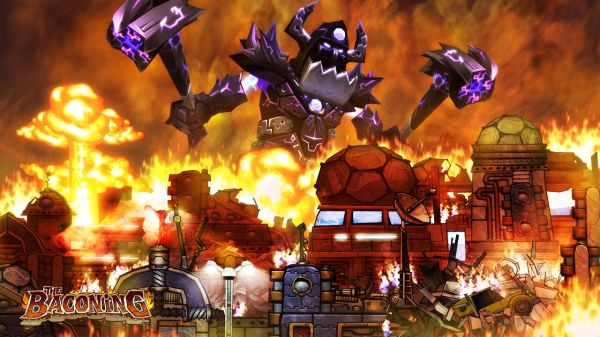 Hothead Games has released a new video announcing The Baconing, the follow up to Deathspank and Deathspank: Thongs of Virtue. It seems that Deathspank has vanquished all the evil that needed vanquishing, and so it was that Deathspank mourned his lost Valeria... At length he sought adventure in distant lands and trod the jeweled thrones of the earth beneath his sandaled feet. Until at last he found his own kingdom and wore his crown upon a troubled brow. Wait, that's the end of 1984's Conan the Destroyer. Never mind.

Deathspank is bored. Thrones are sat upon, thongs are worn, stuff happens. Deathspank to the rescue. This outing will still have that 2 player local sidekick co-op which we're not huge fans of. It appears that your partner will have up to four choices for their tag-along character in this go-round. The Baconing should be out this summer. It will be available on PC, MAC, and "other computerized boxes." That's technical jargon for the XBLA and PSN.