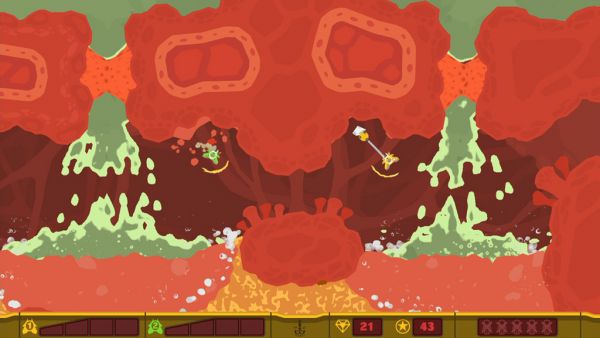 When PixelJunk Shooter 2 launched on PSN Co-Optimus gave it a lukewarm score of 2.5 out of 5.  Although the game was fun, there were issues with the difficultly level and level design.  One player would often find themselves trapped in a corner having to allow the other player to do all the work; this was time consuming and a little dull.

PixelJunk are aiming to fix this issue with their latest patch by including ways of making the game easier and more enjoyable.   To do this, some of the levels have been redesigned and more save points have been added, thus helping the more casual player.  On top of game design changes the new PixelJunk Shooter 2 patch will also improve connectivity online and finding a co-op partner should be easier.  Released in May, it's good to see that PixelJunk are continuing to support their games after release.

Here are the full details of the patch:

1. There was a bug where some enemies would spawn right on top of you giving you that awesome "insta-death" you really don't want in a game... well, we fixed it!

2. The online connectivity has been tuned to allow you to hook up with other players much more easily. Try it out!

3. If you get matched against a higher ranking player you get a nice large cash bonus (Q space bucks of course) if you win! This gives you a big incentive to challenge yourself more when you get matched up against someone who seems better than you. Hint: stay calm and use strategy, you can definitely take them!

4. We added an option to the pause screen that lets you take a break in the middle of a stage and come back later to finish it off. So when your mom calls you to the dinner table just choose that option, go eat your dinner *and* be nice to the environment by switching off your PS3!

5. Even if you kill a few survivors and get a game over screen you can "continue" - your score will be reset, but if you are just exploring and trying to get as far as you can this feature stops you from being thrown back to the start of a stage just because a few puny survivors happen to have gotten in the way of your missiles.

6. A message on the pause screen lets you know if there are any diamonds still hidden in the current screen. This is very handy when you are searching out that last diamond in order to unlock the awesomely cool secret last stage!

7. Acid walls aren't as nasty anymore - we gave the giant alien whose insides you are exploring some antacid and he's feeling a lot better now!