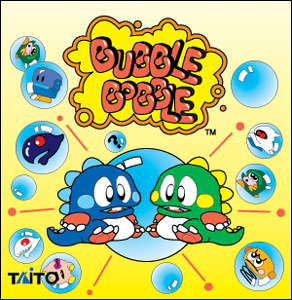 As I'm sure you are aware by now, we here at Co-Optimus are fans of all things cute.  Rainbows, Care Bears, Little Sack people, we love them all.  However, we were missing perhaps the ultimate in cute: itty bitty huge-eyed dinosaurs who blow shiny bubbles!  This oversight will be corrected soon, though, as it looks like Bubble Bobble is headed to the Wii.  A new Bubble Bobble game has been announced for the Japanese WiiWare service, according to GoNintendo.  It is unknown whether the game will make it overseas, but as fans of the cute n' cuddly co-op dinosaurs, we certainly hope it does.  Do you suppose any fan edits with darker, gloomier dinosaurs will be forthcoming?