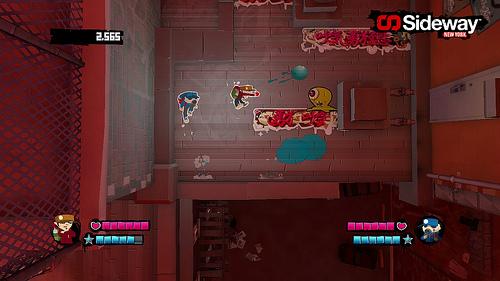 My knowledge of graffiti is limited to train journeys into major cities; the majority of buildings in London appear to be covered in the half demented day-glo scratchings.  For every Banksy there appears to be ten thousand barely literate taggers leaving their mark on historic buildings.  Perhaps I never got the memo suggesting that graffiti is actually cool.  Playbrains must have as their upcoming PSN title, Sideway: New York, puts you and a pal in the baggy pants of a pair of graffiti 'artists' in local drop in/drop out co-op.

Although I don't condone petty vandalism (Jet Set Radio aside), Sideways does look like an interesting downloadable title.  Your character becomes 2D early on in the game and you must tackle a 3D world using graffiti as platforms to work your way around the buildings.  The campaign is fully couch co-op for two players and developer Scott Simpson has unofficially announced the game for arrive late Summer at $9.99.  Simpson is currently haunting the PlayStation Blog if you want to ask him any questions directly.

The concept is best shown in the video and image gallery below.  The co-op aspects of the game could prove either entertaining or confusing, we will have to wait and see which.