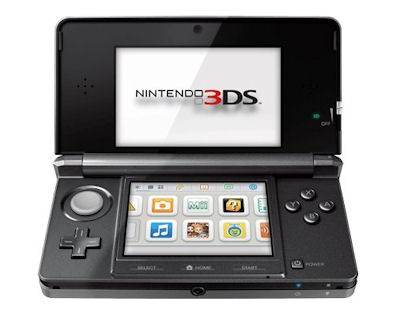 Nintendo's 3DS handheld hasn't gotten much love.  Sales of the system have been sluggish and game releases have been few and far between.  Co-Op games?  Even more scarce.  So Nintendo has done the only wise thing to do in this situation - drop the price by $80.  Starting August 12th the Nintendo 3DS will retail for $169.99.

Whoa whoa whoa says the early adopter.  The system isn't even 6 months old at this point.  What about me?  Don't worry - Nintendo is taking care of you too.

If you buy a Nintendo 3DS and connect it to the 3DS EStore by August 11th you will automatically be registered in the Nintendo 3DS Ambassadors program.  What does that mean?  It means Nintendo owes you a boatload of free games.

Starting Sept. 1, Nintendo 3DS Ambassadors will be able to download 10 NES™ Virtual Console™ games at no charge and before they are available in the Nintendo eShop to the general public. These games, including Super Mario Bros.™, Donkey Kong Jr.™, Balloon Fight™, Ice Climber™ and The Legend of Zelda™, are slated to become paid downloadable games, but Ambassadors get them early for free. Once the paid versions of the games are posted to the Nintendo eShop later in the year, the updated versions will be available to Ambassadors for download at no cost.

By the end of 2011, Nintendo will provide Ambassadors with 10 Game Boy Advance Virtual Console games. These include games like Yoshi's Island™: Super Mario™ Advance 3, Mario Kart™: Super Circuit, Metroid™ Fusion, WarioWare™, Inc.: Mega Microgame$ and Mario vs. Donkey Kong™. These games will be available exclusively to Ambassadors, and Nintendo currently has no plans to make these 10 games available to the general public on the Nintendo 3DS in the future.

More details on the program will be announced in the coming weeks.

If anything, PAX Prime should be filled with a lot more 3DS systems this year...which means a lot more street pass notifications!