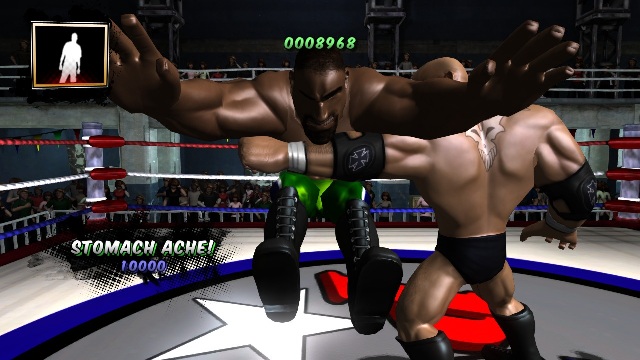 Hulk Hogan must be old, I remember watching him as a child - and I know I'm old.  Busted knees, sore backs and sagging pectorals aren't enough to keep Hollywood Hogan (or me) down for the three count.  His new 2 player co-op Kinect game, Hulk Hogan's Main Event, has recently launched so Majesco have smacked down a new trailer.

The trailer is pretty PR packed and contains approximately; 40% of Hogan shouting at the screen, 40% actors pretending to play the game, and 20% actual game footage.  It is the footage that will be of interest to co-op fans as it highlights the 2 player tag team mode.  One player may find themselves weakening, but with the aid of Kinect they can tag in their buddy to apply their patent pending super move.

My WWE special move is called The Samoza 'Would you like chips with that?' knee drop.  It's essentially a knee drop, but I enquire with the potential victim whether they would like some traditional English chips with their punishment.  Cruel and unusual, I think you will agree.

What is your special wrestling move?  Think on that, as you enjoy the Hulk Hogan's Main Event trailer below: