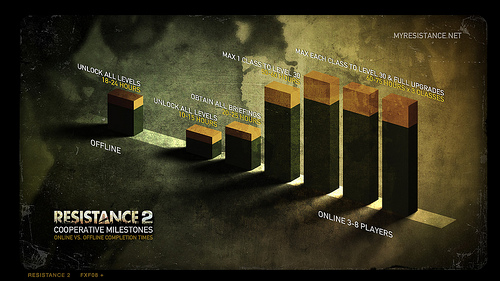 In case you missed it this weekend, there was some pretty good Resistance 2 Co-Op News.  First up, the beta started.  Those folks who preordered via Gamestop or subscribed to Sony's Qore service should have received their codes via email.  If you haven't gotten yours yet, you may want to check your spam filters.

The co-op portion of the beta is in an area called Orick, and it supports randomization of player paths to increase replayability.  Character classes in co-op are capped at level 10, which according to the above chart, should take you a good chunk of time to obtain.  With so few games coming out this fall, you'll have plenty of that...right?  (That was sarcasm)

While the beta won't feature any simultaneous split screen, the full version will thanks to a day 1 patch from developer Insomniac.  Score!