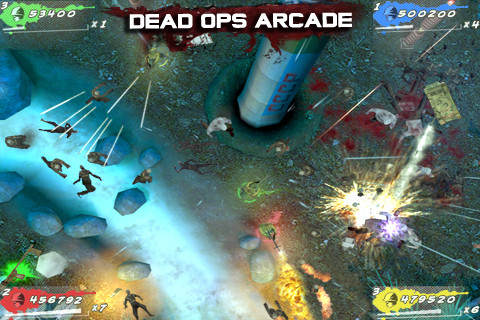 Like Call fo Duty: World at War Zombies, Black Ops is getting a portable version of the popular mode from the console game.  Call of Duty Black Ops: Zombies is the full fledged co-op sequel to the popular iOS game that's playable on iPhones and iPads.

Like the previous game, the first person mode is back with maps inspired by the console version of the game. New maps will be released over time to go with the one map the $6.99 title comes with - Kino Ver Toten.  But new this time is the four player co-op twin-stick shooter mode called Dead Ops Arcade, made popular by the console counterpart.  Included with this mode are 50 levels of play.

Both modes support a brand new voice chat feature making co-op play that much better for you and three friends online.  Call of Duty Black Ops: Zombies is out now.

Get it on the