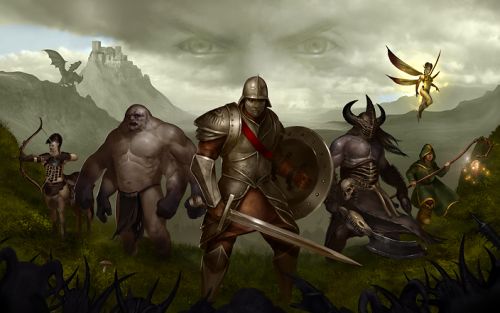 Iron Clad Games, developers of Sins of a Solar Empire, have announced their next game.  It's called Sins of a Dark Age and is a brand new game that's not exactly related to the aforementioned space series of a similar name.  Set in a fantasy world the game looks to combine Defense of the Ancients (think League of Legends) style gameplay with more traditional RTS mechanics.

In Sins of a Dark Age, players join an online team consisting of one Commander and a small group of Heroes who work together to accomplish a specific scenario goal. Go head-to-head against an enemy team in a short, fast-paced multiplayer match or work cooperatively against the AI in custom scenarios. Earn rewards for yourself and your clan, climb in ranks, and watch and share your most glorious replays. Players can choose from an ever-growing pool of heroes, commanders and factions each of which supports unique capabilities.

In a way this sounds a bit similar to Battlefield 2142 in which a special player was a commander and had total oversight of the battle.  Because of this teamwork is even more important than before, by mixing these two gameplay styles players will form some unique strategies to defeat both human and AI opponents.

Sins of a Dark Age will support 5 player online co-op (4 Heroes and 1 Commander) vs the AI.

The game is going to be a free to play game but will surely follow the model set forth by League of Legends offering premium items and heroes for a price.  Iron Clad has said there will be a steady stream of content for the game including Heroes, Commanders, Skins, Maps and Items.

You can find more details on Sins of a Dark Age on the official website.