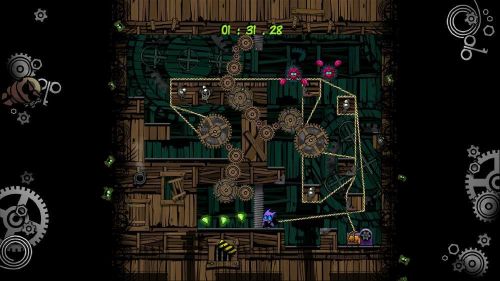 Aw yeah! One of the biggest Xbox Live Arcade blockbusters ever is finally making its way to PC via Steam! I know you've all been waiting for this moment. The Adventures of Shuggy shot to the top of the charts on Xbox Live when it launched last June, and the Steam debut is expected to be the gaming event of the year!

Ok, maybe not. The Adventures of Shuggy is a local co-op game which we really enjoyed. Apparently we were the only ones. Is this another case of indie developers becoming frustrated by the Xbox Live Arcade? Yes. Yes it is. From the developer, Smudged Cat Games' press release:

The Adventures of Shuggy was released on XBLA in June of last year to be largely ignored by everyone, but now we’re trying again,... on Steam.  Yes, that’s right, despite being an excellent slice of retro-styled 2D puzzle-platforming goodness with a cracking variety of different mechanics and ingenious puzzles hardly anyone bought the game.

It appears they were less than satisfied with the Arcade experience. We really enjoyed The Adventures of Shuggy, giving the puzzle game a 4 out of 5 in our Co-Op Review. If you have a 360 you can try out a trial version of the game for zero, that's right, zero MSP.  Check out the adorable launch trailer.

The Adventures of Shuggy supports two player local co-op. You can pick it up right now for 800 MSP ($10) or wait until it comes to Steam. Or you can wait until there's a Steam sale and pick it up for next to nothing.