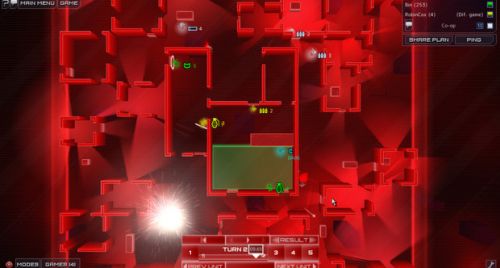 Mode 7 has celebrated their 1 year anniversary of Frozen Synapse with the release of their first expansion pack. Aptly named 'Red', this new DLC injected 2 player co-op into the award winning tactical strategy indie game with players now being able to play the whole campaign cooperatively. Red also adds new challenge missions, a riot shield class, a new multiplayer mode, and more all for the low price of $9.99. Players who do not have Red will still have access to the new content as long as they are playing with someone who has purchased the DLC.

Frozen Synapse: Red allows both local and online 2 player co-op for the 55 mission campaign, as well as an additional 15 campaign missions. There are 10 extra single player challenge missions, six new tracks from nervous_testpilot, and the new 'Upload' multiplayer mode. The Riot Shield unit adds some defence to the squads as he can deflect bullets in front of him. Of course, the ultimate payoff for the expansion, 'Red Mode". What does it do you ask? It makes everything red instead of blue, which is pretty awesome.

If you do not already own Frozen Synapse we won't hold it against you, but with the inclusion of co-op in Red there is no reason to not own this game. Think of it as the planning phase of the old Rainbow Six games, but with a cyberspace aesthetic and music to add a high level tactical vibe. Frozen Synapse can be purchased directly off Mode 7's website or you can grab it on Steam. There is a great co-op pack on sale right now on Steam where you can get two copies of the original for $12.49 as well as a discounted pricing on the Red DLC.