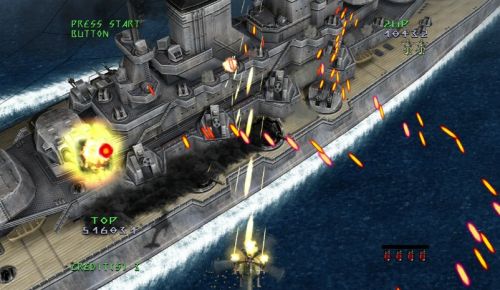 Average shoot'em ups are a dime a dozen, but Under Defeat HD: Deluxe Edition is something special. At least that's what the game's publisher, Rising Star, would like us to believe.  The game originally appeared in arcades in 2005 and then made the jump to the -what? The Dreamcast? Ok. The game was then released on the Dreamcast in 2006. Now it will be coming to the PlayStation 3 this fall.

The new HD version of the game features a 16:9 aspect ratio, original and twin stick controls, and two player local co-op. It will be available both as a retail disc and digitally through the PlayStation Network. The retail package also comes with an assortment of extras:

Yeah, that's right. the retail copy gives you access to a digital art book. Technology! Check out the trailer below.

Under Defeat HD: Deluxe Edition supports two player local co-op. I've found three different release dates for this game. The publisher's site says it will be out on November 14. Wikipedia sets the release date at October 26 (today). Amazon has it listed for November 28. So, yeah. We'll just say it will be out this fall. Two of these dates (Amazon and Rising Star) don't include the announced Xbox 360 version, so we hope it will arrive shortly after the PS3 version. Under Defeat HD: Deluxe Edition is available for $30.