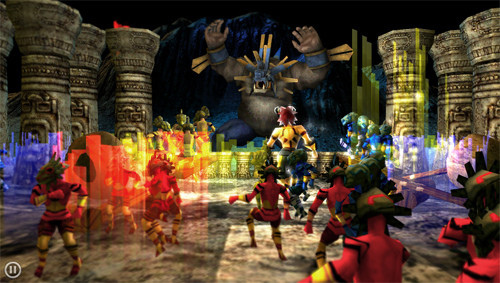 Orgarhythm is a new hybrid video game for the PlayStation Vita. It mixes rhythm and strategy using the Vita's touch screen. After watching some of the videos, the game seems to have a Pikmin vibe. Players control a central figure who can dispatch three different types of soldiers which are governed by earth, fire, and water elemental strengths and weakness.  Two players can use an ad-hoc connection to share control of their soldiers and take on the forces of the God of Darkness. We've got two videos that show the game in action.

Wow. Cool video. But I have no idea how to play the game. No worries, and tutorial video can be found below. This looks like one of those games that easy to pick up but difficult to master. Maybe on of our Vita-owning staff members will take this game for a spin and let us know how it handles.