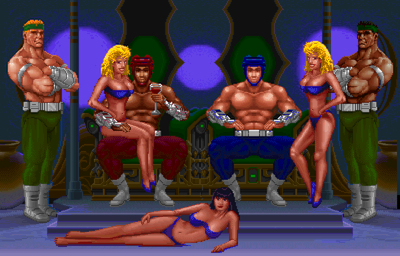 If you've never heard of Total Carnage, it's the sequel to the co-op arcade game Smash T.V.  It's also one of my favorite co-op games ever.  It takes the twin stick formula of Smash T.V. and adds in heavy doses of comedy and continued over the top violence.  I've logged countless hours on this game over many different versions since it was released to home consoles on the SEGA Genesis.  One thing that's always bugged me, at least I thought, was that I never received the true ending to the game.  It turns out that's the result of a bug that's been there since the game was in the arcades in the early 90s.

When you get to the end of Total Carnage, after entering the baby milk factory to kill General Akhboob, you are presented with a long hallway into the Pleasure Dome (which in itself was an inside joke from Smash T.V.)  filled with a ton of presents; that is if you collected enough keys throughout the game.  After making it to the end of the hallway you greet the Smash T.V. red and blue characters and some bikini clad females.  The credits roll and then the game insults you and says you missed picking up some stuff - so no "real" ending for you.  The game insinuates you need to pickup EVERYTHING - so ever since then I've always assumed my co-op partner and I needed to do better.  It was ritual, we'd play this every time we'd get together on whatever the current system was that had a version of the game. Turns out, this ending screen was a bug.  An unintentional bug that's been in the game ever since it released.  Polygon investigated it and even talked to the original programmer about it.  You see, in the most recent port of the game, the person in charge of coding the Midway Arcade Origins found the correct ending screen hidden within the game, it just never actually displayed.  What it comes down to is this - the entire time the game was displaying the super bonus ending screen instead of the vanilla one.

We weren't the only ones that obsesed about this.  Just look at the YouTube videos for the game and read the first comments.  For me, knowing that this was just a bug and we did accomplish what we set out to do is like gaming closure.  I unlocked all the achievements and beat this one for real.  I'll never need to fire it up again and enjoy it with a co-op buddy.  Ah who am I kidding?  There's a baby milk factory to save!