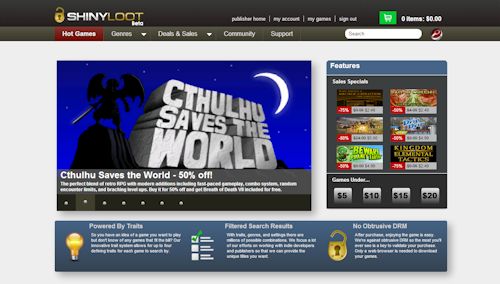 As indie gaming continues to grow, especially in the PC space, it's starting to run into a bit of a problem - namely it's becoming difficult to find the type of indie game you'd enjoy.  Sites like Desura and GoG.com are a good place to find games but sometimes there's just too many to casually browse.  Indie developers have their own problem, while Steam Greenlight gives them a path to the promised land, there's still stiff competition to get on the service.  This means indies are fighting to get noticed by the exact people they want to play their games.  This is where ShinyLoot comes in, a new store front launching in beta today for indie PC games.

ShinyLoot isn't out to "defeat" Steam or be your one stop destination.  In fact, it doesn't even offer a client for purchasing games.  Instead it's a website that breaks games down into traits and allows users to filter on those to find exactly the type of game they'd like.

Perhaps I want an Action game with Cooperative gameplay that's set in Space and has a Challenging difficulty.  Click a few checkboxes and bam - there's SCHAR: Blue Shield Alliance.  How bout that.  (full disclosure, that's the game I was involved with making). ShinyLoot is set to launch soon in a closed beta today and should feature between 150 and 200 games when it launches in a few months.  As of now there's only a handful of cooperative titles - like Wyv and Keep, BSA, and GREED - but that should fill out nicely as the catalog grows.  Of course the best thing about it is you are one checkbox away from all of the co-op games available.  You can even combine the traits with filters for discounts, prices, and more to really nail down the type of indie game you are looking for.

Almost all of the games are DRM free or offer a limited form of DRM, usually some sort of product key.  A good portion of the games are under $20 with most under $10.  We were assured that all transactions are secure and no personal information is stored, the site accepts most credit cards and PayPal for payment.

If you're interested in checking out ShinyLoot head on over to the official site to sign up and use the special code cooptimus512slbeta to gain access.