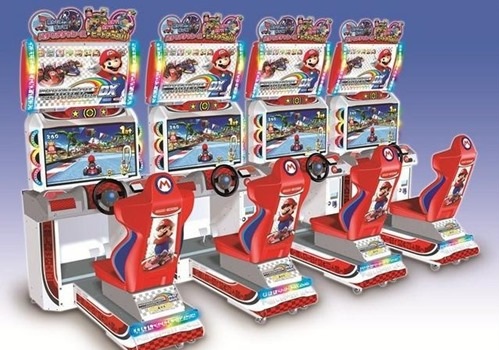 Exciting news comes from Japan with leaked information and pictures of Mario Kart: Arcade GP DX. Nintendo is teaming up with Namco Bandai again to bring us the continuation of the karting classic. It seems the two monoliths are becoming rather well acquainted as they are also bro'ing up for the next Super Smash Bros. title. The catch? It is an arcade title currently exclusive to Japan. Previous installments in the Japanese arcades include Mario Kart Arcade GP and Mario Kart Arcade GP2.

According to IGN, the speedy kart racer will debut in just two weeks at the Japanese Amusement Expo. Thanks to an astute NeoGAF poster, screens have surfaced featuring a bevy of information for the game. It appears that the game will feature a sort of camera mechanism that will allow you to use your mug in the game. We can also see the use of the hang gliders utilized in Mario Kart 7. On to the co-op goodness! According to translations from users at NeoGAF, a few modes have been listed.  These include the standard single-player Grand Prix mode, "clone battle" mode, competitive four player mode, and two player local co-op. According to NintendoLife, the co-op mode is a team mode that will allow two people to combine their karts, one doing the driving and one handling the weapons (similar to Mario Kart Double Dash). At least ten "redesigned" courses are promised as well. A Japanese release is expected sometime this summer.

Although the racer will only debut in Japan, are the screenshots and information enough to entice us for a Wii U release? If you live in Japan, go bananas with Mario Kart: GP DX sometime this summer, featuring two player local co-op. Until then, the rest of us will go shell crazy waiting for international news.