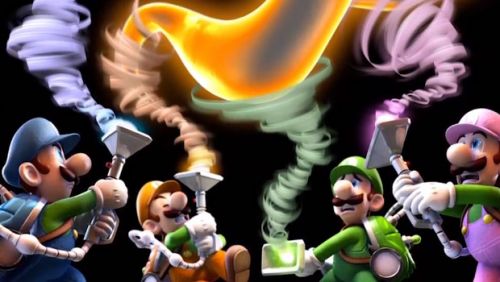 There’s never been a better time to be a fan of the younger Mario brother. Recently, Nintendo had announced 2013 to be the “Year of Luigi”, revealing Luigi’s next big break into the limelight with Luigi’s Mansion: Dark Moon.

Luigi couldn’t be happier these days, with is upcoming appearance in the New Super Mario Bros. U DLC, and now this latest announcement of his second poltergeist capturing game, Luigi’s Mansion: Dark Moon to arrive in late March. Shigeru Miyamoto, the famous creator of various Nintendo franchises like Luigi’s Mansion, wanted to bring Luigi back to his days of sucking up ghosts on the 3DS, because he felt like the hardware was perfect for such an atmospheric title. The lighting and shadow effects, as well as the 3D depth of the rooms, allows gamers to feel like they are experience the mansion as vividly as Luigi is. Miyamoto explains through Nintendo Direct:

The Poltergust, Luigi’s unique tool in the series, was sort of the equivalent of the Ghostbuster proton back, used to suck in the mischievous ghosts and capture them. As much as this looks to be a light adventure game with horror influences, it’s showcased to be just as much the puzzle game as before. This sequel will give many new upgrades to the Poltergust that we never saw before, such as the ability to suction objects into its nozzle for carrying/placing, as well as blowing objects away to reveal hidden items or areas. More comedic and intuitive uses of the Polergust include: floating into the air by blowing up balloons, spinning fans with gusts of air, or shooting objects into enemies. Lastly, a new “dark light” mechanic reveals other hidden items that cannot be seen normally. This game will also feature multiple cooperative modes where gamers play as an assortment of Luigi variations. Up to 4 players can team up either locally, online, or through download play, to clean ghosts out of a haunted tower called the “Scarescraper”. There will be  3 modes to choose from: “Hunter Mode”, where players work together to capture multiple ghosts, “Rush Mode”, which sets a time limit for players to find a way to escape floors of the skyscraper, and “Polterpup Mode”, requiring players to locate hidden ghost dogs and capture them.

If you own a 3DS, show Luigi some love and pick up and play co-op with a group of your friends. Luigi’s Mansion: Dark Moon will officially release in the states on March 24th, 2013.