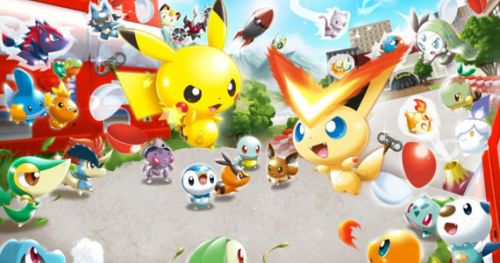 Skylanders might have more insane competition in the near future. The upcoming Wii U Pokémon game coming out in Japan will have the same sort of toy accessories that Skylanders has been known for, only with mega-popular Pokémon characters.

According to a photograph taken from Japan’s CoroCoro Comic magazine last month, the game is being called, Pokémon Scramble (Pokemon Rumble U everywhere else). Like Skylanders or Disney Infinity, Pokémon figurines have outfitted with a special microchip that communicates with the Wii U using the GamePad’s NFC reader. Players will be able to store tons of information about their Pokémon’s growth on these chips and use their character on other people’s games (up to four local players can play together). This will be the first game that will utilize the Wii U's NFC reader thus far. Which sort of Pokémon figures will be included with this game? Obviously the iconic Pokémon mascot, Pikachu will be there, along with 6 other Pokémon ( will most likely contain the 'Starters' from the current handheld generation). Not much is known about what the actual game itself is, but Pokémon training, battling, and/or minigames seems to be the case from the gallery of screenshots shown below. These figures will be available at Pokémon Center stores all across Japan, going for about $2 each in US dollars, while he game itself will be downloadable from Nintendo’s e-Shop, priced at roughly $20 on April 24th.

The Pokémon franchise is thriving these days, so we should see this game hit the US sometime in the near future. It will be interesting to see how this game will compare to Skylanders’ popularity.