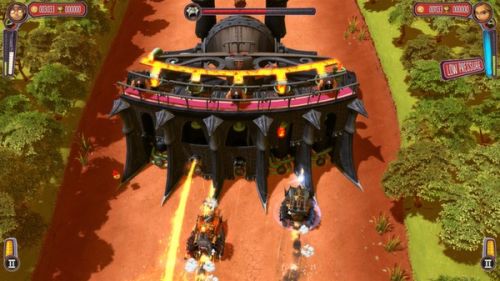 I reminisced about Hanna-Barbera cartoons the other day, looking back on all the kooky stuff they put forth over the years. One that really stood out from the rest was this show called “Wacky Races”, where a dozen unique car racers used various slapstick devices to run each other off the road and win the race. Flash forward to today and I recently was notified of a new co-op racing game called “Pressure” that captured that same sort of wackiness the show brought. German-based, independent studio, Chasing Carrots, aimed to make Pressure a unique, fun 2-player experience due to their passion for co-op gaming.

The story revolves around a Steambuggy racer named Morgan, who’s keen on stopping the insane villain known as Count Soap II. The Count’s evil plan is to pump all of earth’s water supply into the core of the planet to run his enormous wellness spa business of all things. This doesn’t really make sense to us either, but at least it gives us a reason to jump into racecars of death and stop him and his staff by racing, ramming, and blasting them to bits.

The 2-player co-op mode is definitely the way to go in this game, allowing gamers to play as both Morgan and another female Steambuggy racer working together to defeat the Count. As a racing-action AND also arcade-shooter, Pressure combines these two genre’s to form a game that is pure goofy and filled with lots of crazy characters and funkified music to enjoy. Here are some of the key features found in Pressure:

Pressure is now out for PC via digital download on Steam or through retail for $15 (33% discount ends on 4/2!). It will also be making an appearance on Xbox LIVE Arcade and PlayStation Network this year, but no official date has been set. Go out and give this wacky racing-shooter a try with a friend!