Originally released in 1993, DOOM introduced millions to the white-knuckle excitement of the First Person Shooter (FPS). Relive the classic demon-blasting action, now with up to four players over Xbox Live®, 5.1 Surround Sound, and smoother graphics. You're a Marine stationed on Mars when a military experiment goes wrong. Your mission: Blast your way to freedom through the classic world of DOOM. Face off against Hell’s army, including stampeding demons, and lay waste to rooms of monsters with an arsenal of classic weapons. Experience all the classic DOOM levels, monsters, and weapons. Play the entire single-player game solo or in co-op mode via split screen or over Xbox Live. 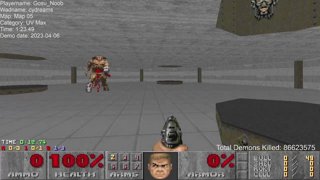 This page contains co-op info for DOOM on the Xbox 360. All information about DOOM was correct at the time of posting. Information is subject to change. If you see any errors please email us.