Choose between seven classes (Monk, Witch Doctor, Wizard, Barbarian, Demon Hunter, Crusader, and Necromancer) and play with four friends on your couch, via local wireless connection, or online. Players can trade items and complete quests. Difficulty scales based on number of players.

Combo co-op is supported in the following configurations:

A fallen star burns across the sky, signaling the rebirth of a long-forgotten evil, and calling mortal heroes to arms once more. Return to Tristam to face the forces of evil once again.

Two decades have passed since the events of the Diablo II: Lord of Destruction expansion pack, in which the demonic lords, Diablo, Mephisto, and Baal, set out across the world of Sanctuary on a vicious rampage, twisting humanity to their unholy will. Yet for those who battled the Prime Evils, the memory fades slowly. When Deckard Cain returns to the ruins of Tristram Cathedral seeking clues to defeat new stirrings of evil, a fiery harbinger of doom falls from the heavens, striking the very ground where Diablo once entered the world. This fire from the sky reawakens ancient evils, but also calls the heroes of Sanctuary to defend the mortal world against the rising powers of the Burning Hells once again.

The Diablo III: Eternal Collection includes the "Reaper of Souls" and "Rise of the Necromancer" DLC. 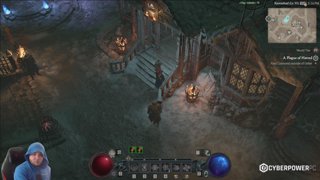 This page contains co-op info for Diablo 3 on the Nintendo Switch. All information about Diablo 3 was correct at the time of posting. Information is subject to change. If you see any errors please email us.