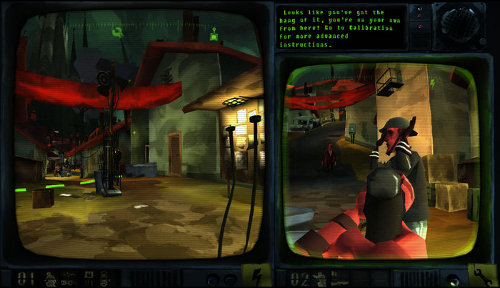 A curious new first person shooter recently hit GOG.com. Signal Ops from Space Bullet Dynamics Corp. puts you in charge of a squad of operatives carrying out a series of espionage missions. You know, things like stealing secrets, planting evidence, assassinating targets, and just generally being a destructive little spy. The interesting thing is that Signal Ops makes use of multiple points of view, allowing you to monitor and work with your squad like some sort of totally non-creepy boss. Did you really need to go to the bathroom that urgently, Jenkins?

Signal Ops was designed with old school sensibilities in mind, giving us plenty of open areas as well as twisted little passageways to explore instead of, you know, cut scenes and straightforward levels. (Burn?) It's also got a wry sense of humor and some pretty unusual graphics. Co-op play allows up to three players to run through single player missions together, dropping in whenever someone gets the urge to eliminate the enemies of the Dark Father.