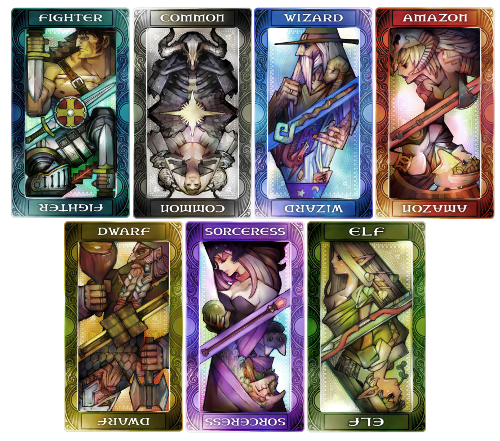 Vanillaware's Dragon's Crown is still a few months away from release, but the team isn't shy about releasing artwork and bits of information about the upcoming action/RPG brawler. A big handful of character portraits, wallpapers and tarot cards have been unleashed, showing some of the game's main characters standing around ready to bash some skulls in. Mostly.

Two videos were also released recently, one for the Dwarf and one for the Elf. The former is a burly fellow who wields two weapons and has some surprisingly acrobatic moves at his disposal. It's just as well, as he likes to fight up close, hopping in to bring on the hurt then scampering away before the hurts brings itself on him:

The Elf uses the power of nature to charge her bow with the power of th elements. She prefers to attack from a distance but can still do some damage up close. She has a limited supply of arrows, so no spamming!

The artwork is definitely one of the high points of Dragon's Crown, but we can't wait to get our hands on it since it's, you know, Vanillaware and all. The game supports four player co-op both online and offline and is set for release August 6th on PlayStation 3 and PS Vita.